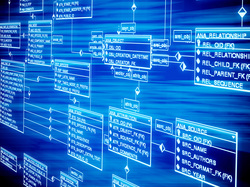 An electronic medical record is, in essence, a huge incredibly
complex relational database, and the information vital to clinicians for
decision-making is presented as report views into that database. The logical
structure, management program, and reporting system of the data repository will
have an enormous impact on the responsiveness and usefulness of the EMR. Proper
design and management of the database are also critical for maintaining the
accuracy, integrity, and security of the data it contains. Because of my
concerns about problems with interactions between EMR’s and their end-users, I
was especially interested in this course, and it didn’t disappoint me.
The course began with understanding the core concepts of the entity relationship (ER) model, including the difference between entities,
instances, and attributes and the different types of relationships which can exist between entities. We then learned to use ER diagrams to construct the relational models which constitute the primary structure of a database. The first half of the course concluded with the study of structured query language (SQL), the major programming language used to retrieve information from a database and present it in a useful and organized form.
After the midterm we progressed into the mathematics of database construction, the reasons why some schemas are better than others, the nature of functional dependencies and minimum covers, and the ways to weed out redundancies that can confuse database structure. We also spent a great deal of time on normalization, the process of optimizing the database structure to guard against anomalies and logical inconsistencies. Finally, we studied database management systems, the actual software programs used to construct and maintain databases in the real world (think Oracle or Access).
The final project, carried out in three phases and encompassing everything we were learning in the course, was to design and construct a
database system for the hypothetical Chicago Press to use in managing the production phase of its publications. The system was required to enter, track, and monitor all parts of the production process from initial proposal and early manuscripts through to the actual printing and book production. I have attached the project assignment, the entity relationship diagram and relational model derived from the business equirements, and an actual working model of the database executed in Microsoft Access. The encryption unlocking code is cis317. This was my first course in the medical informatics program, and I adapted easily to the distance-learning model. I had tremendous fun actually creating a database, simplified though it was, and I suspect I was the only student in the class who wished we had more time to study SQL and the rigorous mathematics of database structure.